Putting the law in the palm of your hand

Joining the OpenGov Foundation Board of Directors 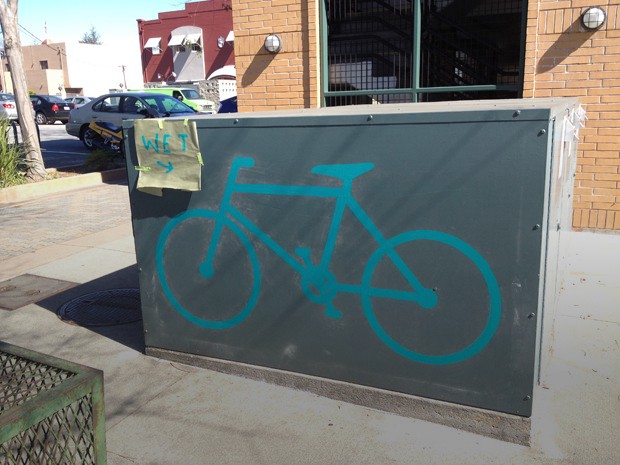 If you were walking around the sunny coastal town of Santa Cruz, California, in the middle of 2012, you might have seen a rather strange sight. Crouched over what appeared to be an massive green electrical box, a young woman, wearing a white lab coat and work goggles, wielding a can of paint. What was she doing? Trying to help you understand the city a little bit better.

Those green boxes were in fact bike storage units — lovingly put in place by the city government — but presented as more eyesore and than useful city service. The woman was a Code for America fellow named Tamara, who joined with some local friends to change that, hand painting clear and bold bike symbols on the storage units.

I love so much in this story, from Santa Cruz city government building modern transportation infrastructure, to Tamara opting for paint and goggles over keyboard and Photoshop. Proof that a little (sanctioned) graffiti can go a long way.

But at a deeper level, this story reminds me of a central challenge — and in fact opportunity — for governance: how do you actually get citizens engaged and informed? And in a democracy where government is supposed to work for the people, how do you make the most essential stuff of government — America’s legislation and laws, rules and regulations, and the countless decisions behind them — accessible, understandable, and useful to We the People? Questions like these led me to Code for America four years ago. And how CfA’s fellows, brigades, governments, and startups have begun to answer them amazes me.

About two years into Code for America, we were visited by Seamus Kraft, founder and Executive Director of the OpenGov Foundation, and what was meant to be a quick hello turned into a long and exciting conversation about how deeply aligned the organizations are. OpenGov, like CfA a non-profit, helps governments unearth their laws, codes, and legislation, which were previously buried deep within City Hall and replant them in the light of day: user-centric digital platforms that not only keep you informed but also help you to engage. (Tag line for one OpenGov project: “Legal codes, for humans.”) Their underlying belief is that for democracy to work, citizens must know the rules of the game, and how it’s being played. Most notably, they first built Madison for online crowd sourcing of federal legislation, and have since expanded the StateDecoded to upgrade how we access our laws, and started the AmericaDecoded network to bring those tools to scale across the country.

We quickly realized that CfA and OpenGov were working on two sides of the same coin: CfA was helping make the day-to-day of government – the bureaucracy -— more efficient and accessible; OpenGov was going after the underlying architecture, the policy and laws, that determine how the bureaucracy functions. Different layers of the same stack.

So the conversation quickly turned to this: how should we work together? (“Whether we should” was so obvious, it was implied.) Since then, it has been inspiring to see the way the CfA community has connected with The OpenGov Foundation’s tools: in San Francisco, for instance, the city and local brigade worked together to decode San Francisco’s laws, and they even hosted policy “hackathons” to collaboratively draft new legislation, bringing that bureaucracy-hacking mentality (for the first time I know of) into the policy realm. I think that’s really just the start of how we can think about changing the way policy is written once citizens have the transparency and context they need to be part of the process. Could you start helping cities write laws collaboratively across city lines? Could you start using data to make the laws smarter? And could you — to borrow Tim O’Reilly’s phrase, make the law more algorithmic and responsive to citizens’ needs? In these important questions, and others, OpenGov’s work is central. Because first things first: we need to know what the laws truly are.

This is why I was so honored when Seamus and his co-founder — open government champion Congressman Darrell Issa — asked me to take a more formal role in helping The OpenGov Foundation. I’m pleased to share that I’ll be joining the Board of Directors, working closely with Seamus, Darrell and the rest of the Board. This is an impressive team with a profoundly important purpose; I’m excited to have a small role in helping push it forward.

Too often, we perceive government as something abstract, distant, and out of our grasp—something others concern themselves with, not each and all of us. There are few greater risks to democracy than that mindset. Our collective challenge must be to transform that perception, to make government something we can see and understand, to pull our public institutions closer to where they are meant to be: in our hands.