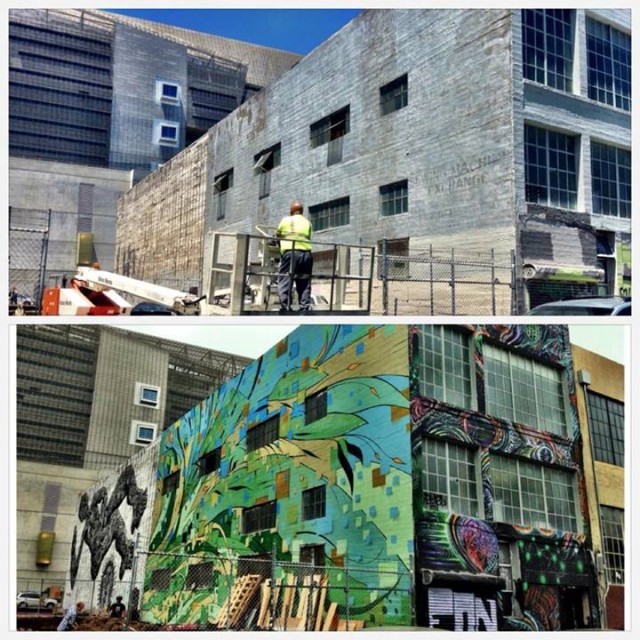 Late one evening last summer, my colleague Bob and I were doing our routine walk after a long day in the office to our parking garage on the corner of 7th and Mission, about two blocks away from the office in SF. It’s a walk we had done over 100 times already, so accustomed we were to the environment we hardly noticed the street lights, let alone the buildings around us. For us, it was a good chance to chat briefly about the day, and game out what’s next.

But this day was a bit different. Right before our parking garage, there was a bit of commotion, some people gathered in front of a building, lights strung up across what used to be an empty, trash filled lot, and wonderful mural painted aside walls which I couldn’t honestly tell you what was there before (see above).

An energetic young man noticed our interest and invited us in. This urban outlier was called “Freespace,” a project borne out of the National Day of Civic Hacking.

What most had taken to be a one day or weekend event, these organizers had blown out into a month-long affair, resurrecting this building in central SOMA into an maker/hacker/co-working space. So the lore goes, the building owner was willing to rent the space out, so the lead organizer was able to get his hands on the real estate for all of $1 for the month (no joke), and with that, plus what had to be massive amounts of insanely creative human capital, they transformed what had been a dilapidated oversight into a thriving civic hub. Floor one was hackers, laptops ups clicking away at civic apps; floor two was dinner time, big crock pots, fresh vegetables, and hot places racing around —maybe too fast — with enough to feed everyone and anyone in the building— and the third floor was the art gallery, probably the only quiet spot in the otherwise electric place, where art with an urban twist was on the display — typically “recycled” from old street signs and the like.

To say the space was big would be wrong. At most, I would say it felt more like three narrow hallways stacked atop each other, somehow connected with maze like stairways. If possible, that only added to the energy.

For all the talk of “citizen engagement” I left Freespace with a rather distinct sentiment; engagement has a kind of transaction feel to it: you are being engaged. This was more expressive, more social, more free. It felt more like civic life.

Bob and I only stayed for a few minutes, and I wanted to get back there, but I didn’t get a chance to. And to be fair, I can’t speak to whether the outcomes of those projects bore any fruit, and there are some real questions of the sustainablity of this kind of model — it’s hard to imagine more spaces in cities being for rent for just a dollar a month.

Still, this story forces us, I think, to explore what could be done with our urban space, particular those underutilized, dilapidated, vacant, or blighted. And, I think, we can do so both in terms of means and ends. By that, I venture to say that, we can think about how to use those places (buildings, structures, etc) differently, and how to go about revitalizing them.

The Freespace example is just one such distinct model of how to use a urban space differently. The civic possibilities are endless. The City of Boston ran a fascinating program last year called, “City Hall to Go,” where they took a food truck, and drove it around the city to both boost awareness of city services, but also deliver whatever simple services to citizens that they could remotely, right where citizens are. 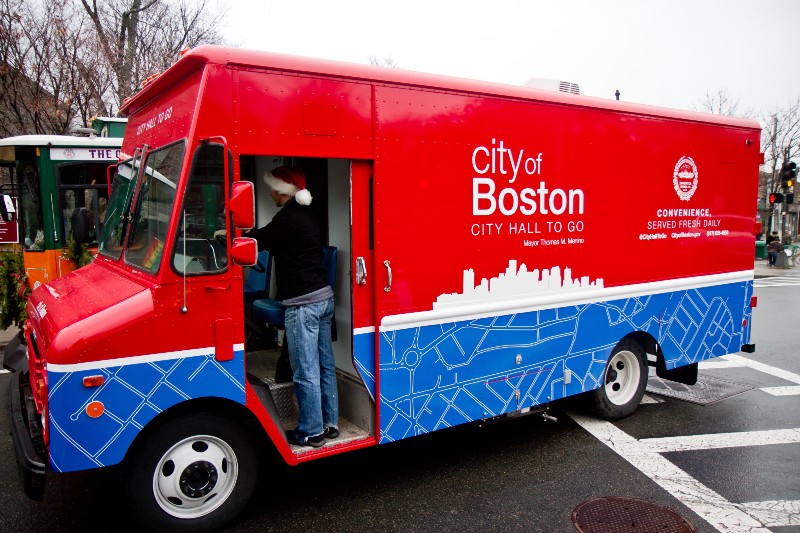 Now with mobile technology and the mobile web, there’s less need to be in City Hall for many civic functions, you can set up shop anywhere. Think about that for a moment. Currently, citizens have to line up at a finite number of centralized government offices. That doesn’t make sense in the 21st century. Just as Boston’s City Hall to Go took city services to the street, you could envision setting up tech powered, demand-driven, remote service delivery centers throughout the city. Put another way: What if you could turn any revitalized vacant building into a pop-up City Hall?

(Note: I realize both staffing and communications challenges with such a radical shift for local administration are real, but given the challenges facing traditional service delivery, I think we ought to get creative.)

Beyond that, there are limitless options for uses for this spaces when revitalized: small after-school, interest-based tutorials for neighborhood; Skillshares for young professionals thinking of changing careers; new community centers, pop-up immunization clinics, job training centers, etc. And of course, there’s the housing opportunities. In Utah, the state invested heavily in building new housing and revitalizing old housing to make affordable units for the homeless and pairing them with social services (which they found was cheaper than previous tactics), and they are on track to “end homelessness by 2015.”

None of those ideas, though, are all that novel — the urban revitalization space is one with many great thinkers and doers (including the Freespace team), who have been active for years. What excites me in particular now, is that I think there’s a real opportunity to bring to bear technology on to this core urban problem.

As I’ve written before, BlightStatus (now CivicInsight) helped the City of New Orleans understand its challenge around vacant properties, first collecting its disparate data, then visualizing it, and finally getting it into the hands of the people who needed it. What’s fascinating about their story, though, was who ended up being their “power user”. Sure the city found value it, and indeed, many citizens living on blocks with blighted houses use the tool. But the user whose life they truly made better was the local Habitat for Humanity. They had an itch that BlightStatus scratched. The tooled included a simple emailed notification featured that let subscribers know whenever the city deemed a property ready for tear down, construction, etc — very valuable information for Habitat. Now Habitat can more quickly, and more cleverly make decisions around which properties to revitalize.

So it turned out that BlightStatus incidentally closed the feedback loop between the city and community, between the decision-makers and doers, the problem and the solution.

In Philadelphia, a similar story took place, but went one step further:

The company [Streamline Solutions] hired a software developer to build a tool for them that used the city’s Licenses and Inspections API, which offered a real-time feed of data about property violations.

Since then, Streamline has identified about 100 properties each month that it hopes to purchase and fix up…

Before they would have to drive throughout the city, hoping to spot run-down houses to then make a bid on. Now, using the city’s open data around vacant and abandoned properties, they systematically identified opportunities for revitalization, and each month are now able to purchase two to five of those to fix and resell. Other business owners have used similar data to target historical properties with broken windows for repair.

Open data of this kind — the kind released from the day-to-day operations of a city — has been called “civic exhaust”. What we’re seeing is that this civic exhaust can be fuel for businesses looking to not just power their businesses but also improve the communities within which they live.

But why stop there? There must be smaller, simpler tasks, which urban properties require to be brought back up to code — say an unkempt lot or the graffiti on the wall of an abandoned building. With the emergence of real-time “small” job marketplaces, such as TaskRabbit, what if we were to take this Philadelphia example to scale, and start funneling these opportunities towards jobseekers in a city? How about we hook up a city’s building inspection open data into the TaskRabbit API? You could even pair this with training and the federal smartphone program that’s gaining traction to ensure that citizens that wanted to participate had the tools and know how to do so.

If it could work — and I realize that’s a big “if”— it’s a kind of “smart” city that systematically creates jobs and strengthens communities.

The challenges our cities face in this century are many, and so are the opportunities that technology affords. One thing that’s becoming increasingly clear is that there’s a profound desire to try new things, in San Francisco to make a one day event into a month long residency; in New Orleans to rebuild homes; in Philadelphia to build systems that do so even faster. You’ll notice that all of these examples used technology in some manner or another — either as an excuse to get together, or as the fundamental of the initiative.

What’s next, though, is to think deeply about all of the technology at our disposal in the urban environment: the fact that we can very quickly move things around; the fact that we can easily connect with other people and share opportunities with them; and the fact that once one of our little handheld devices enter into a room it can take on a different life altogether.

Cities have immense potential to rethink properties, public or private, vacant or not.

On all that, we’re just getting started.