In one picture — Why governments need CMOs… 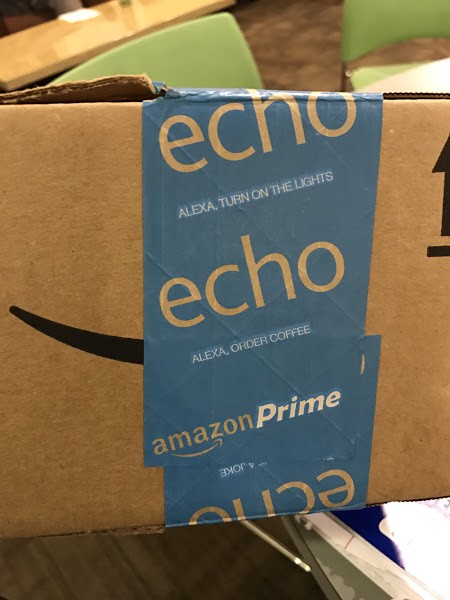 Backstory: I recently ordered some K-Cups from Amazon (because who really wants to walk those two blocks for the convenience store?). Yes, K-Cups: coffee, a grocery item, something you’d find at a Trader Joe’s, Target or even Walmart — but not the kind of thing you’d expect a book or electronics store to carry.

However odd that might be — and however long I thought about it — when my little brown box of coffee came in, my mind immediately jumped to electronics, not java. That’s because someone (or some team) at Amazon was clever enough to realize that they have massively valuable advertising real estate that costs them next to nothing.

Yes, the tape that they already had to buy and use, but instead of just considering it a logistical hassle, they used it as a strategic opportunity. They were able to get a piece of advertising in my home, right in front of me, that I couldn’t even try to avoid if I wanted to get my beloved K-Cups.

And guess what? Right after, I went and looked up what the Echo Dot is.

But crucially, this happened because someone or some team thought of it and agreed on it. That person or team wasn’t just tasked with selling more k-cups but building out the broader business, which at this time happened to revolve around the new Echo. Next month, maybe it’s turkey baste, the next, free gift wrap. It’s marketing 101: cross promotion.

For anyone familiar with the Echo they know that it’s a virtual assistant. A way to figure out how long your commute will be, what today’s weather’s like; or what recent scores were. And of course, you can play music, record some notes, and if you get particularly creative, deploy your own automated holiday decorations (or “wicked cool tree” as it’s known in most circles). But at its the Echoes are designed as shopping assistants more than personal assistants. As you’ve probably seen through the ads from Alec Baldwin and the like, the Echo powered by Alexa makes it simple to order new products or replace orders for ones that you need to have often.

In this way the Echo is really your gateway into the Amazon purchasing ecosystem. Of course the device itself comes at a cost ranging from $50 now for the lightest Echo Dot to about $180 or so for the full scale Echo. At those rates however, direct sales alone could not justify their prioritization, particularly during the holidays. So why focus so much on them? My guess, they look at the Echo hardware as the gateway drug to the far more profitable products and services you can use it to enjoy. Just like a cheap or free smartphone app with in-app purchases, the Echo gets to work (for Amazon’s ledgers that is) after you’ve set it up in your house. No longer do I need to get out my laptop or phone to order new hair gel or K-Cups — it’s just too easy not to, and too much fun.

I would argue that this is only possible because Amazon has developed a smart, clever, and highly strategic plan for welcoming customers into their ecosystem. To do this requires a very clear and accepted vision and strategy. If different departments were jockeying everyday for space on those cardboard boxes, this wouldn’t be possible. Instead senior leadership, probably C-Level agreed that Echo was their big play and they wanted to make it as big as possible.

Bringing us back to city government, I would say this is the missing piece when it comes to government service delivery. There’s no standardized, commonly accepted, and more importantly properly used system for an on ramp into your city public institutions.

Some may point to 311 or increasingly centralized government homepages, but usage numbers still do not suggest these are the main avenues for citizen interaction with government. Nor is there compelling evidence that they are structured in a way to encourage further participation (ie the civic upsell). But even if those systems were in place, there is not someone in the typical org chart whose specific task it is to make sure that a common, consistent strategy is implemented on an operational level. No one is making sure that we’ve figured out what goes on that piece of tape and that that piece of tape gets slapped on every single box.

This is where I think a CMO is essential.

Marketing can often be taken as an ugly word, same as PR. It’s sometimes hard to think that it’s justifiable to spend government public dollars like something like marketing, which is typically related to profit generation or even consumer exploitation. Neither, understandably, are comfortable terms in the public sector. Maybe there’s a rhetorical shift necessary — or just a reexamination of our preconceptions and biases.

But to not invest in marketing is to not only disregard how important and essential certain services are to so many people, but also to underutilize all the other tax dollars we’re pouring in day after day into those very public institutions for those very services. Further, strong C-Level leadership from someone who has the responsibility of going out there and selling might encourage more actionable, direct, and accessible strategies and vision.

In my experience, the best marketing comes hand-in-hand with great product or service, and I don’t think one leads to the other. Both need to be present for the best outcome. If we can find a way to apply this thinking to the public sector, we can do a lot better than ordering K-Cups: we could effectively deliver government services to exactly where people need them, which is to say, exactly where they are.