Transparency: You cannot unring the bell.

A strange thing happened today. For a while, I have drawn a fairly bright line between my social networks: facebook was for college…

A strange thing happened today. For a while, I have drawn a fairly bright line between my social networks: facebook was for college friends; twitter business friends. On twitter, I’d end up seeing all the news I needed — and then some — about open government, civic technology, and the like, but on facebook very little of the same. That changed today. 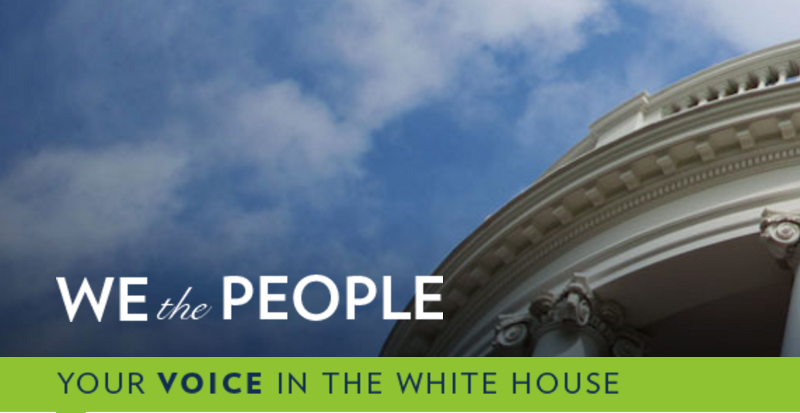 Today I saw on facebook multiple posts regarding the “We The People” petitions platform that the Obama White House deployed to encourage citizen engagement in the policy making process. The idea was simple enough: anyone could post a petition and if it gained enough support (i.e. 100K+ endorsements) the administration would be required to issue a formal response. Effectively it democratized the press pool, enabling anyone with a popular enough question to get an answer.

For open government, open data, and govtech nerds like myself this was a bold and important move for meaningful transparency and citizen engagement. Instead of outside groups clawing for information from their public institutions, the administration was willingly opening itself up.

The platform did gain some traction, particularly initially, requiring the White House to issue formal statements on issues ranging from the legalization of marijuana to the alleged creation of a government-run “Death Star”. Nerd paradise.

So thus, I was surprised to see the We The People site get a healthy dose of visibility this week on my facebook newsfeed. In response to President Trump’s call to defund the cultural programs, specifically (the widely beloved) NPR, many took to action, creating a petition for the new administration to change its stance — or at least explain it.

Unfortunately, for some reason up-votes for that petition failed to register. The Independent even picked up the story. (It was initially stuck at 27, now at 54, and at least a dozen or so of my friends have already commented stating that it’s been stuck there even with their votes.) A similar phenomenon happened earlier this week with a petition for President Trump to release his tax records; that was seemingly automatically resolved after some time (which likely points to a caching or CDN issue).

Since the code is ostensibly open source, and there hasn’t been any code changes, it stands to reason that this was not a deliberate attempt by the Trump White House to silence participation, even though they have said they won’t follow President Obama’s commitment to respond to all petitions at 100K signatures. Unfortunate timing all the same for a software glitch…

But instead of belaboring the technical or even policy issues at play with this system going defunct, I find it more interesting to think about the fact that this platform and its functionality made its way onto my facebook feed, a place where I would strain to find posts (other than my own) related to transparency, open government, or citizen engagement. While the opengov community has grown in recent years, it’s a stretch to say it’s anything like a national past time.

So why so much interest? And why is there more engagement now around the platform than before when it was first launched, and for the most part, functional?

I would venture to say this phenomenon is teaching us something interesting about transparency initiatives and their timeline for impact.

In fairness, I’ve been skeptical about the power of open data to drive better governance, as has been typically the argument of good government reformers. Not that there isn’t a case for it, just that real, causal outcomes have been hard to identify. Instead, open data — for the past few years — has proven more utility in powering better citizen experiences, fueling new businesses, and enabling collaboration between governments.

Today, however, I think I might be changing my mind. Not because transparency has led to real change in our government, but that the lack of transparency has provoked serious dialogue and attention from both the mass media and social media.

Transparency is then a bell that you cannot unring. At least not without someone hearing. And possibly even more people than when it first emerged. That I think is what we are seeing now.

Transparency is then a bell that you cannot unring. At least not without someone hearing. And possibly even more people than when it first emerged. That I think is what we are seeing now.

And what we may need to learn from this is that there’s a kind of benchmarking effect for transparency initiatives. And that may be its broader impact and long-term legacy. As an administration moves the ball forward — even if things don’t seriously change — that becomes the new standard, and attempts to walk it back are met with more interest (probably negative) than when they first were enacted (probably positive).

But any interest in government is better than disinterest. Torpor is democracy’s death knell.

This says something somewhat disturbing about the nature of public opinion towards government: we focus on missteps more than progress. But any interest in government is better than disinterest. Torpor is democracy’s death knell. And politics is the “slow boring of hard boards.” So I take solace in knowing that even if transparency’s time comes later than anticipated, it does come and sometimes thanks to unanticipated advocates.