What I have learned from my many teachers…

I was recently asked to speak at my alma mater (Claremont McKenna College) about my career and how CMC helped shape and empower it. Being…

I was recently asked to speak at my alma mater (Claremont McKenna College) about my career and how CMC helped shape and empower it. Being just about 6 years out of college, I didn’t really feel well suited to provide any of my own insight — I’m still really just getting started. Instead, I opted to share some key thoughts or pieces of advice I have received over my (brief) career and how they’ve shaped my thinking (even more than my career). 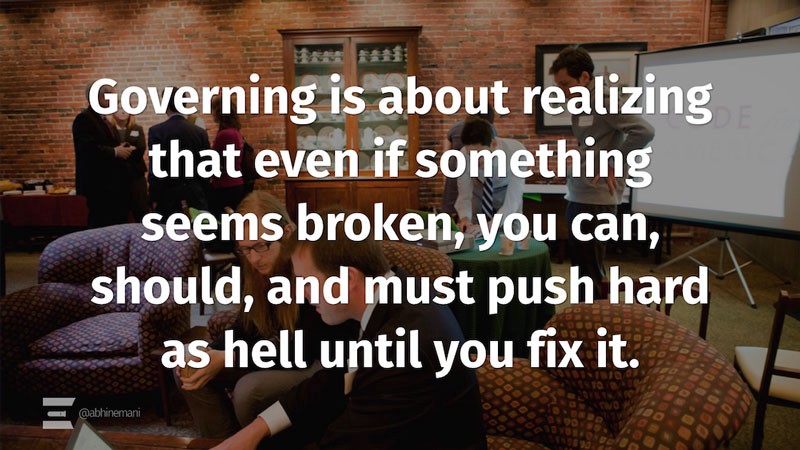 I somewhat foolishly decided to start with a math major in college. I was always the “math” kid in the family; my sister taught my basic functions (addition, multiplication, etc) years before they came up in school. And I suppose as the only son in an Indian family, math and science were “destined” to be my arena.

College math, or proper math as I like to call it, is a bit different than memorizing multiplication tables. Abstract algebra, number theory, analysis… becoming a human calculator wasn’t terribly useful when my homework looked more like essays than excel sheets.

But I stuck with it.

And I stuck with it because of one very special professor I had the privilege of learning from. She started me off in multi-variable, and then helped me through Analysis I and II. But it wasn’t any theorem or proof she taught that motivated me onwards (meanwhile my GPA kept trickling lower).

It was something she said.

Once someone was complaining that their friends say, “they aren’t math people,” and she quickly retorted:

“That’s because someone, some teacher, when they were younger broke them. They said they couldn’t do math, and that stuck. But, here’s the thing: everyone can do math. And everyone should. It’s just thinking deliberately.”

Someone broke them. That’s what stuck with me. The idea that in our formative years if you’re told you can’t do something, or if something can’t work, that sticks. You’re broken. Or it’s broken. And it can’t be fixed.

But her optimism in saying that you can and you should resonated.

I think that’s what’s motivated me to work in a sector where most people think it’s broken and can’t be fixed: the government. To me, it’s something that can, should, and must work. And we must merely forget whatever ghost in our past told us otherwise. We must learn that all of us can, should, and must make government work, and work for all of us.

What do you mean by that?

I entered college like most “entitled, arrogant millennial” I suppose. I thought I knew everything — or at least I could talk and act like I could.

Then I took my first serious Philosophy class.

It was Aesthetics of Literature, which is basically an examination of the philosophy around what makes great books. My high school was a “great books” high school, so of course, entitled, arrogant me thought this wouldn’t be a problem; it’d be a cake walk.

So 16-year-old, freshman me walked into the classroom, and found it ch0ck-full of seniors and who had spent years in philosophy classes, and a professor (who is now a good friend) then wasn’t one to suffer fools.

But this isn’t a story about hubris, instead one of clarity.

A few courses in I mustered up the courage to chime in. I can’t recall the book, or the discussion (you’ll learn why in a moment). I do recall saying something along the lines of, “The construct the author is creating doesn’t add up. The construct seems flawed, and the construct seems plain wrong.” There was lots of hand motions — justiculations really — every time I said construct, almost like intimating that there was some physical thing everyone should see.

The professsor asked, “So what do you mean by ‘construct’?”

My world went blank. I’m pretty sure I started sweating, eyes jetting around the room, hoping dearly someone else would bail me out. Because I didn’t know what I meant by that. It was my conceit to say that I thought something was wrong but really didn’t know what it was or how to say it. I used a baseless generality to conceal the hollowness of my own thinking.

So the question came again, “What do you mean by ‘construct’”?

I had no answer, and after what seemed like a lifetime, I admitted that. I said, I didn’t really know what I meant by it, and I needed time to think it through more clearly and deliberately.

That was the day I learned the profound importance of rhetoric. The words we use. And the thinking behind them. I had been able to skate by I think in the past with smooth sounding words and vibrant hand motions. But in truth, there were so many times I wasn’t really clear on what I was thinking; I just was talking.

That distinction between talking and thinking has stuck with me ever since. I now write the way I talk; I talk the way I think; I see no lines between them: it’s just me.

Tell me a story

While I hammered on through my maths, I also advanced a different (or seemingly different) major: Philosophy, Politics, and Economics. (And let me tell you, that when I told people I was a Philosophy, Politics, and Economics and Math major, the response usually was impress, but confusion — for good reason.) The PPE major as it’s known isn’t three different programs, but one special one: an integrated curriculum, modeled off of its Oxford great godparents, to broadly touch on these three elements of public life, and show the crucial connections.

It was joking described as the “cocktail napkin” major: you learn enough to speak about anything intelligently at a cocktail party with a pen an a nearby napkin (preferably with a hand drawn graph).

But this would seem like a big undertaking, bigger still when you learned that the course worked with a fairly strict regime: read one book a week, and write a 5–10 page paper — and then be prepared to do a graded “defense” against one of your peers in front of your professor.

So how to handle that, along with all your other classes and extracurriculars (academic and recreational)?

He explained it like this: you aren’t really trying to understand every argument, data point, or example from the books you’re reading. You’re trying to understand their story. This felt odd, given that we were reading nonfiction such as Rawls’ Theory of Justice or Sen’s Development as Freedom. These weren’t fairy tales; they were Noble Prize winning scholarly works. But he pushed further. He said that at the end of the day all these writers are basically trying to tell you a story, a narrative you could follow (and love), and your job was to — at best — find a competing narrative, a story that was more compelling.

And that’s how I learned Philosophy, Politics, and Economics, and I think that’s also how I learned to think. That same style worked for me years later in foundation grant pitches, in sales meetings, in strategy sessions.

My other “teacher” at work once said that “stories are maps of the world.” And that’s why they are so powerful in business and in life: they give people clarity, grounding, and a place from which to look ahead.

There are too many mentors, advisors, and “teachers” I’ve had since college for me to count. And too many lessons learned to share. What clicked as I rounded out this trip down memory lane was one meeting in particular with a Code for America Board Member, when I was then interim Co-Executive Director, having the privilege of working closely with a world-class board.

It was happy days, mostly, as we had solid streams of funding coming in, increasingly clarity on our strategy and impact, and the wonderful problem of having to hire, not fire people. (A rare boon at a nonprofit.)

My partner-in-crime, co-director and I met with board member who had experience scaling companies that dwarfed our little challenge. But he cared about the organization and offered up some advice.

He told us a story about how when he was recruiting and with his senior staff — and in particular when doing so in front of others, say at a all-hands — he would make a point to call out his senior team, asking hard questions, and demanding answers and ideas. One might think this was a show of force: a boss looking to remind others that he/she is the boss. But he, of course, has a more subtle, thoughtful reason for doing this. Paraphrasing:

“I needed people to understand that leaders in the organization have to push, not pull.”

Push, not pull. I later learned that this meant something fairly simple but powerful. It wasn’t the CEO’s job to answer every question for the team, to be “pulled” into solving their problems. Instead the CEO should be “pushed” — challenged and driven ahead by the team. Put simply, you must surround yourself with people who aren’t looking for answers but demanding progress, and making it happen.

They don’t pull from you. They push you.

This led to hiring decisions, of course, but to me, it led to a reflection on relationships in general, and in particular our relationship collectively with each other. That is to say, with government. (You just knew I’d get back here, right?)

It’s easy I think to slip into a pull mentality with our public institutions. What is government doing for me today? Why hasn’t it filled that pothole? Why isn’t my kid’s school better? Or why do I have to wait on the phone for 2 hours to get my business permit? And I’m going to keep pulling until I get answers and get what I want.

Indeed for many the relationship with government must be pull: those disenfranchised, those needing help and support. It’s government’s role in so many cases to help. And we should do that with pride.

But, not always. In a democracy, it’s our role of citizens to push as well. And that might mean complaining. But like my friend said about leaders, it’s about helping solve those problems yourself as well; it’s about giving back; it’s about taking it upon yourself to make things better. It’s about running for office, taking a job in government, doing something, anything to be a citizen that takes the lead.

So I suppose to pull together these rambling thoughts:

Governing is about realizing that even if something seems broken, you can, should, and must push hard as hell until you fix it.